The Genus Arisaema (Araceae) - Cobra Lily, Jack in the Pulpit 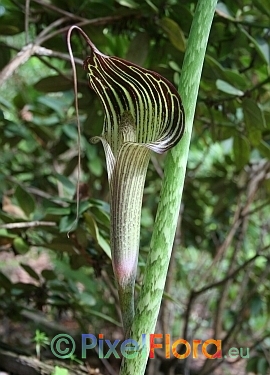 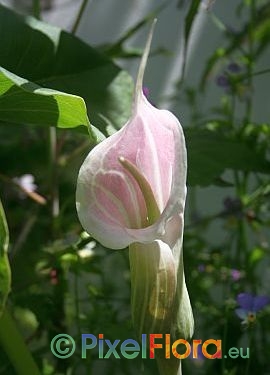 The genus Arisaema (commonly known as "Cobra Lilies" or "Jack in the Pulpit") is made up of more than 250 herbaceous species, which are distributed throughout temperate to tropical areas on all continents with the exception of Australia, Europe and South America. Their main distributional range is located from the western Himalayas, southeast to China and Japan, whereas in North America only two to three species and in Central America some two species are known at present. The majority of Arisaema species grow in humus-rich, well-aerated soils in mountain meadows and slopes as well as open spots in lowland to high altitude woods, few species grow in pure loamy soils in sunny rock crevices. An almost complete list of all Arisaema species including many photos of Cobra Lilies is available from the website of the International Aroid Society. Another very useful site with numerous high quality photos is the Arisaema Gallery built up by Roy Herold.

As in other related genera within the broad Aroid family (Araceae), such as Amorphophallus (Titan Aroids), Arum (Lord an Ladies), Dracontium, Dracunculus (Devil's Tongues), Pinellia (Mouseplants),  Pseudodracontium, and Typhonium, most species develop a subterranean round to elongated tuber or fleshy rhizome which serves as a storage organ. Each growing cycle plants produce one to several leaves, which are usually either dissected, resembling an ornamental umbrella (e.g. Arisaema ciliatum, Arisaema concinnum, Arisaema erubescens, Arisaema urashima), or trilobed. The latter may become quite large in several species, e.g. Arisaema candidissimum, Arisaema fargesii, and Arisaema propinquum. 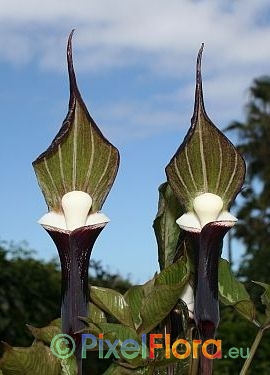 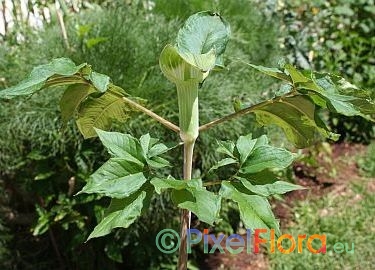 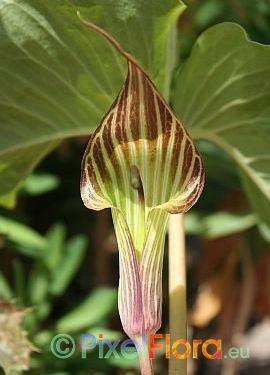 On maturity plants produce a usually single, either male or female inflorescence before or with the leaves. Only few species make a female and a male inflorescence at the same time on a single specimen. In general immature species are male, with maturity they change their sex to female. Several Cobra Lilies switch sex almost every other year in order to store enough energy for fruiting the following year after their male phase. The inflorescence is composed of a sometimes very colorful and most attractively shaped outer spathe (pseudo petal) as is the case for Arisaema griffithii, Arisaema urashima, and Arisaema utile, and an inner spadix, which may be shorter or protruding the spathe like a long threadlike tail. The latter hosts the quite small male and female flowers at its base. In nature propagation is almost entirely from seed. In order receive viably seeds, at least one female and one male plant have to flower at the same time. Only few species, such as Arisaema flavum and Arisaema flavum ssp. abbreviatum set viable seeds if a male plant is absent.

The frutescence in most Arisaema consists of ornamental, densely packed, bright colored orange to intense scarlet berries. These contain one to three (rarely more) seeds. After harvest seeds shall be cleaned from any adherent fruit pulp, as this may contain some germination inhibitors. Fruits always have to be handled with latex gloves, as the pulp contains chemical substances (raphid crystals), which cause severe skin irritation, lasting for a couple of days. 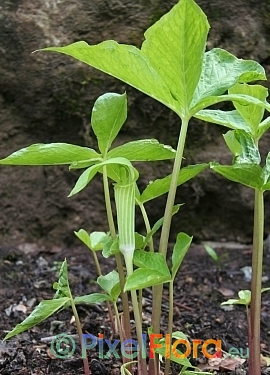 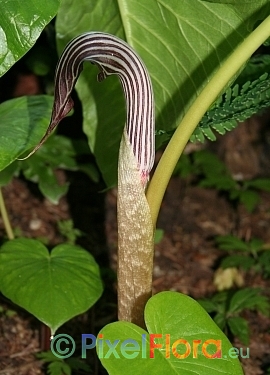 Many Asian species from high altitudes as well as the two North American Cobra Lilies (Arisaema dracontium and Arisaema triphyllum) are winter hardy to USDA Zone 7 (or even less), i.e. a winter low of some -18°C / 0°F. These species are suited to be grown outside in the garden in the northern hemisphere. They may even be cultivated in areas with a colder climate than zone 7, as long as an insulating snow cover is rather common in these regions. Another survival method is to plant adult tubers and corms rather deep (down to some 30cm / 17"), so that they are not freezing through in a very cold winter. Most Arisaema species can be grown in a humus-rich, highly aerated soil. Some gravel added to the planting hole may significantly enhance drainage. Dormant plants should be protected with a dry mulch layer in winter to ovoid winter dampness and freezing through. Most prefer a partially shaded to sunny, protected spot. The warmer the climate, the more shaded the spot should be. Cobra Lilies require sufficient watering during their growing period, whereas in winter during dormancy, the tubers should be kept rather dry. Several species (e.g. Arisaema japonicum, Arisaema ringens, and Arisaema sikokianum) start to flower in early spring, thus they should be given some extra protection if freezing at night occurs.

Following a list of species which proved sufficiently hardy to be tried for a permanent culture in the garden:

B) Non-hardy subtropical or tropical Arisaema species
In culture non-hardy species are easily grown in pots in any humus-rich, preferably organic, well drained and well aerated soil. The majority of these tropical or subtropical Cobra Lilies can be grown at some 20°C (optimal 25°C) during summer in a semi-moist soil in a partially shaded to sunny spot with some protection from direct sunlight, especially during hours at midday. Few species have a prolonged growing cycle which exceeds 12 months, or are even semi-evergreen, however in most species leaves start to yellow in summer to early autumn. At this point plants should be kept rather dry at a minimum of some 15°C. Most tubers stay dormant for some 3 to 7 months. Thus they are preferably moved to a warmer spot with beginning of spring, the increase in temperature during daytime stimulates in most tropical Cobra Lilies new growth. As soon as new leaves appear from the center of the tuber, plants shall be watered carefully again. As in Amorphophallus in the majority of Cobra Lilies roots primarily emerge from the upper part of the tuber, just at the base of leaf stalks. Thus tubers shall be planted deep enough so that the roots may develop freely. Three times the size of the tuber is a suitable depth for most species.

Following a selection list of tropical or subtropical species which are best grown under warm greenhouse conditions: 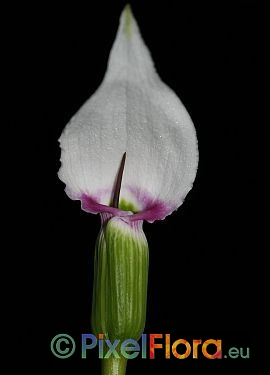 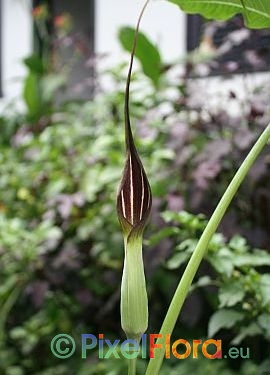 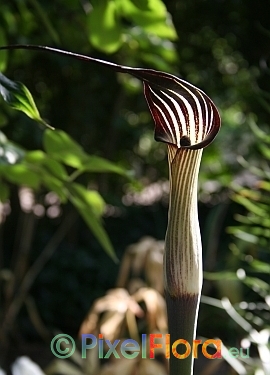 All Arisaema species are easily raised from seed. Seeds are potted rather close to each other some 1 cm deep in the same soil mix as mentioned above, which is kept only slightly moist. The optimal temperature is some 25°C at day and some 20°C at night. Hence most seedlings occur in a period of some 4 to 8 weeks, some may take a couple of weeks more. Rarely certain some species (e.g. Arisaema elephas, Arisaema thunbergii, and Arisaema urashima) may take an entire growing cycle before they eventually start to produce the first leaf. Most seedlings of Cobra Lilies have a first growing cycle of some 2 to 6 months. Thus pots should be kept warm in partial shade throughout the year as long as seedlings are “green”, i.e. as long as they are with leaves. Few seedlings may make not only one, but two or more leaves before they enter dormancy for the first time. Dormant young tubers shall be kept almost completely dry at some 5°C (hardy species) and some 20°C (tropical species) respectively. If they are kept too moist during dormancy they may easily start to rot. In spring with rising temperatures they will all resprout. Hardy species should preferably be raised under frostfree conditions throughout the year until they have flowering size after some two to four years. They are best planted to the garden just before breaking dormancy in mid spring.

Pests and Diseases
Especially dormant tubers are sometimes prone to fungal or bacterial infections and rotting, especially in a too moist soil at low temperatures. If an infection is detected (parts of the tuber start to get slimy or mashy), an effort of rescue may be started by generously cutting away all infected parts. The rest of the tuber shall hence be dusted with some power fungicide and kept absolutely dry for several days before being repotted in a rather dry soil. In general and as a prevention measure against fungal infections older plants should not be irrigated during dormancy as long as the new leaf does not emerge. Other pests or diseases are virtually unknown in cultivation.

Note: Information on Amorphophallus (Titan Arums), a genus which is closely related to Arisaema within the aroid family (Araceae), are available on this page.

© 1999-2014 www.rareplants.eu
All rights reserved. All information on this page is presented without any guarantee.
IMPRINT